Start with one or consider building an entire Work-From-Home team within a department or division of your business. Here are some of the teams and common job roles that can be easily relocated to Work-From-Home staff in the Philippines

Cost comparison saving are indicative and vary from AUD $30K to $90K per person per annum, depending on the role. 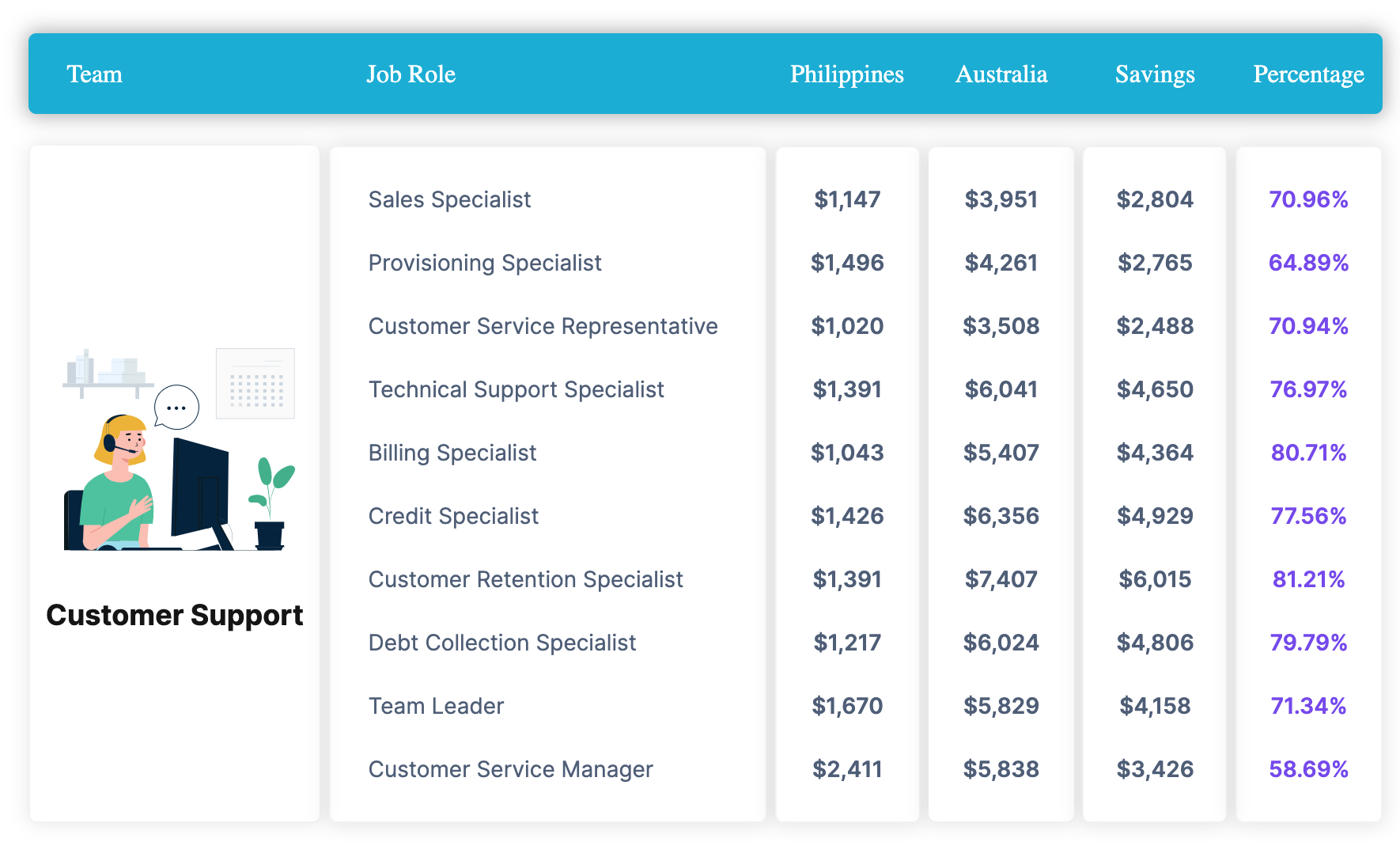 What industry sector are you?

We support startups, early stage and small medium business across a range of industry sectors. No matter if you need one remote staff, a team or multiple divisions, we’re here to help grow your business.

English is the official language

With more than 41 million highly trained people in the workforce, the talent pool in the Philippines is deep and very rich.

You can outstaff just about any role that can be performed virtually via an internet connection – from customer support and sales staff to bookkeeps and programmers. And you can fill roles at levels from junior and intermediate right up to senior and management levels.

English is the official language

The Philippines is the third-largest English-speaking country in the world, with approximately 60 million English speakers.

English is one of the country’s two official national languages (the other being Tagalog ), so everyone learns it at school, and it’s the official language of government, the legal system and higher education.

Importantly, this is more than just a statistic. Filipinos don’t just speak English; they speak it very well. In fact, among cities where English is a second language, Manila ranks no.8 in the world for proficiency.

The Philippines boasts a 97.5% literacy rate, and more than 680,000 people graduate from university each year. (For context, Australia has approx. 300,000 graduates per year and the US has approximately 3 million.)

As a former US colony with a 90% Christian population, the Philippines has a very ‘westernized’ culture. Its cities, office buildings, malls and restaurants all feel very familiar to most Americans and Australians. And because there’s no language barrier or real workplace differences, working with Filipinos feels almost identical to working with Americans or Australians.

Filipinos are also renowned for their loyalty and honesty, and for holding themselves accountable to their commitments. They value their jobs highly and tend to stay with good employers for longer than the average American or Australian employee.

Thanks to exceptionally low living costs in the Philippines, labor and occupancy expenses combined are approximately 70% lower than in Australia and the US, so you can drastically reduce your operational costs.

Get in touch with us

Get in contact today, and we’ll get your Work-From-Home team up and running.

We’ll find the right talent for your job for free. Get started today.